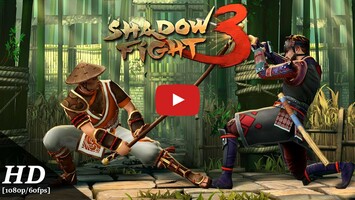 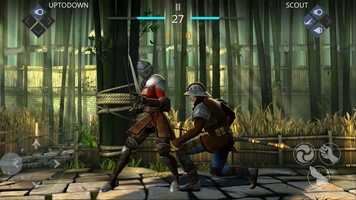 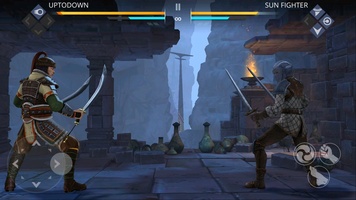 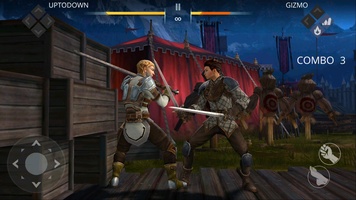 Advertisement
Shadow Fight 3 is a 2D fighting game where you have to create your own warrior, equip him with tons of armor and weapons, and try to defeat all the enemies you encounter.

You can move your character with the virtual D-pad on the left, and you can attack with the kick and punch buttons. Like all good fighting games, you can also make amazing combos by combining different directions and actions.

As you play Shadow Fight 3, you'll run into all kinds of enemies, each one with its own abilities and fighting style. Some enemies are more aggressive and won't leave you alone, while others will wait for you to make a mistake.

In Shadow Fight 3, you can use tons of different weapons and armor that you unlock as you play. You can use swords, spears, batons, and other melee weapons. You can also equip your character with different helmets and shields. And, of course, you can customize your character itself.

Shadow Fight 3 is a 2D fighting game with excellent graphics and a ton of amazing content that stands out for its aesthetic as well as its character animation. It's a great game that improves upon almost every aspect of its predecessors.
Reviewed by Andrés López

Really great game! More polished and fun than the last one.

On my phone, which is an android 9, I'm lagging, I don't know why

Update already shadow fight arena to version 0.3.32 I am writing to you already under every other game please update n n n n

Injustice: Gods Among Us
DC superheroes in their most spectacular battle
Real Steel World Robot Boxing
Robot fights inspired by the movie of the same name
Shadow Fight 2
Spectacular battles in feudal Japan
The King of Fighters-A 2012
The free version of The King of Fighters-A 2012
Marvel Contest of Champions
The most epic battles in the universe
Real Steel Champions
Spectacular robot fights
Kung Fu Do Fighting
Short, pixelated fights reminiscent of Street Fighter
Mortal Kombat
Awesome fighting action on your smartphone

NinJump
Climb as high as you can
Devil Ninja 2 Mission
Ninjas, demons, werewolves, and lots of action
Ninja Run
No one runs and throws shurikens faster than a ninja
Ninja Saga
The best social ninja game
Shadow Blade
Ninjas, platforms and a lot of blood
Clumsy Ninja
A virtual ninja living on your Android device
Ninja UP!
Help this ninja get as high as he can
Spring Ninja
Jumping from platform to platform is not as easy as it seems

Genshin Impact
An open-world RPG with spectacular graphics
One Piece: Fighting Path
A unique adventure in the One Piece world
Brawl Stars
3-on-3 battles from the creators of Clash Royale and Clash of Clans
League of Legends: Wild Rift
The MOBA king deploys its arsenal on Android
Angry Birds Epic
Join the Angry Birds on their most epic adventure
LifeAfter (Global)
Cling to life in a hostile world
Blockman GO-Adventures
Travel and have fun in all the worlds offered by this application

Eternal Evolution
Build an army and defend your kingdom
Heroes Evolved
A great MOBA with a great community
High Heels
See how far your heels can take you in this addictive game
Angry Birds Blast
Pop balloons and free the birds
Potion Punch 2
Become an alchemical genius and sell potions
Guns at Dawn: Shooter Arena
Close combat duels in the West
Top Gun Legends
Fly high and fast to take down enemy planes
Duplo World
Learn numbers, shapes and other concepts alongside the LEGO characters